COMIC: Covid-19 has inspired a rethink of how we design and use our built environments READ MORE 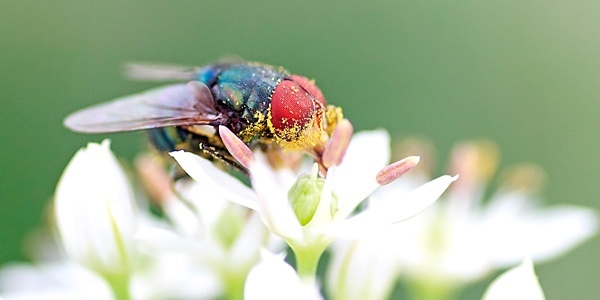 Think before you swat: The much-maligned fly could be the key to ensuring future supplies of many of the world’s favorite foods.

Arsenic-poisoned water remains a threat to public health the world over. Scientists hope to change that.

Coronavirus transmission: SARS-CoV-2 in the air

VIDEO: One year into the pandemic, a clearer understanding of how Covid-19 infections spread suggest people need to shift efforts away from cleaning surfaces and toward better ventilation and filtration 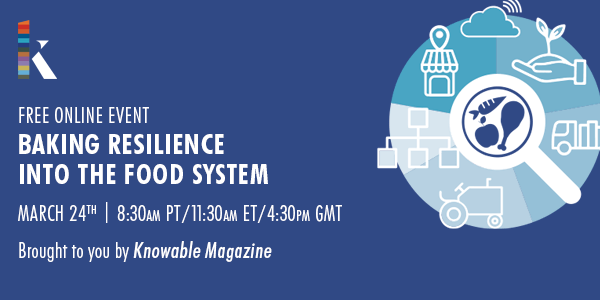 Baking resilience into the food system

Empty grocery stores shelves. Shuttered restaurants. Milk spoiled and dumped. The pandemic served as an unscheduled stress test for the world’s food systems, highlighting gaps, weak points and strengths. Join us for a conversation with two leading experts on what we’ve learned and the urgent need to build more resilient food supply chains in the face of coming threats from climate change and future pandemics.

For Denise Kühnert, pivoting to study SARS-CoV-2 last year was a curious change of pace. An infectious-disease expert at Germany’s Max Planck Institute for the Science of Human History, she’d been studying Yersinia pestis, the bacterium behind the Black Death, which wiped out between 30 and 60 percent of the European population between 1346 and 1353. Her investigations rely on scarce fragments of the bacterium’s DNA, extracted from victims’ remains.

“With the Black Death, we are so grateful for every genome that we can find,” Kühnert says. Contrast that with a database created to share SARS-CoV-2 genomes that, as of March 5, holds more than 700,000 submissions — up from 450,000 just a few weeks ago.

Collected from patients around the world, the flood of viral genomes allows scientists like Kühnert to track the evolution of SARS-CoV-2 variants and may help determine where the virus came from and where new viral threats may emerge. But molecular investigations of the past are also hugely relevant to the current pandemic. Techniques to pluck genomes from ancient bones and teeth are being applied to detect SARS-CoV-2 in wastewater systems, for example, helping public health officials and scientists track the spread of the virus in real time.

“It’s really quite a special case,” Kühnert says of this multifaceted flurry of molecular Covid work. “There will be so much data from this virus that we’ll have a lot to do in the next 10 years to work through all of it. We’ll understand so much more about this virus — and it’s going to help us deal with future emerging pathogens as well.”

Editor’s note: Last week’s Expert Take with psychologist Michele Gelfand incorrectly described the questions moviegoers responded to before and after watching the film Contagion. People were asked to rate how justifiable they viewed norm-violating activities such as cheating on taxes; they were not asked whether or not they would call out people who broke rules.

Drowning in emails If you’ve ever felt buried under a mountain of emails, or ashamed for not leaping to answer every new note that pings your inbox, you’re certainly not alone. Email is making us miserable, writes Cal Newport for the New Yorker. Studies that measure psychological upset suggest that stress levels skyrocket as we try to stay on top of avalanches of new messages. But psychologists say that ignoring them can be just as fraught. Newport speaks to experts about how employers and society at large might finally start to rein in this monster of convenience.

Epic journey Hawaii may be one of the most geographically isolated locations in the world, but time after time, it has been seeded with plants and animals brought in by outsiders on wind, water and wing. One such foreign species, the California tarplant, is now thought to have miraculously hitchhiked over 2,000 miles to Kauai, perhaps on a migrating plover, millions of years ago. That traveler gave rise to Hawaii’s famed silverswords and their relatives, writes Emily Underwood for the California Native Plant Society’s Flora magazine. Underwood explores the evolutionary and cultural significance of the plants, how they and other species may reckon with climate change — and what it means to be “native” to a place.

Fly-by Researchers from fields as diverse as neuroscience, ecology and physics want to know: How do insects such as dragonflies and mayflies actually, well, fly? For the Scientist, Amanda Heidt covers how high-speed cameras, virtual reality setups, weather radar and miniature backpacks that measure neural activity are helping scientists to answer that question. The research is already inspiring a new generation of drones and other flying robots that could track forest fire smoke and invisible gas leaks or help to find survivors after disasters. (Read our story for more on the tricks that insects use to take flight.)

Calls for papers in your subject area